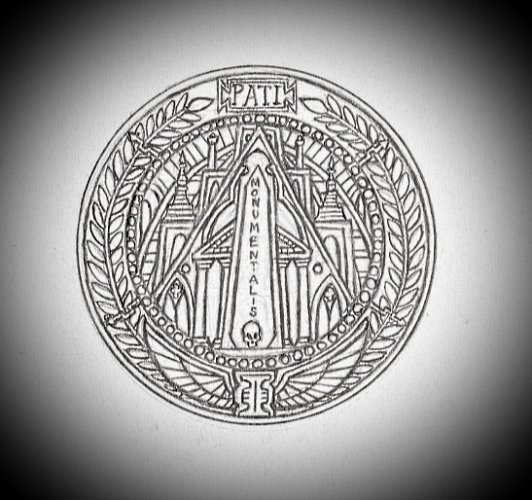 The Holy Inquisition of His Divine Majesty the God-Emperor of Mankind contain a great many factions and sects, driven by a myriad of convoluted ideologies, raw fanaticism and harrowing revelations. One such obscure faction are the Monumentalists, regarded as blinkered and myopic by most other Inquisitors.

Monumentalists believe in purifying mankind's devotion to the Emperor through backbreaking great works and the erection of titanic edifices. Monumentalists ensnare planetary elites, regional leaders of the Adeptus Ministorum, and other ruling oligarchies into initiating megalomaniac construction projects. These often require the mobilization of entire continents', worlds' or even systems' worth of manpower, resources and logistical support networks. Swathes of planetary provinces, or even entire planets, are enslaved under the new gruelling dictates of quarrying, mining, transporting, laying foundations and building.

The purpose behind such an enormous mustering of people, industries and natural resources is not simply the creation of material glorifications to the Terran Imperator, but of putting humanity through a trial by toil. The massive suffering and death incurred by the giant construction projects themselves, and by the steep demands put upon the economy and an impoverished populace, are the primary means by which Monumentalists strive to realize their goals.

Monumentalism aim to challenge the loyalty and faith of man by driving him to the breaking point through despair, loss and neverending hardships. Only those truly devoted to the Golden Throne will be able to bear the brunt of endless taskmaster brutality, tax collector ruthlessness and cruel work regime (even by Imperial standards) without cracking and falling into sedition, thought of self, and heresy. As such Monumentalist Inquisitors take less interest in the architecture and engineering of the work itself, but focus instead on detecting, rooting out and crushing any deviants and dissatisfied Imperial subjects likely to emerge due to the harrowing human costs of gargantuan monument building.

To this Inquisitorial sect, the stunning edifices left behind by succesful Monumentalist operations stand as material proof of the spiritual purification of the local population through blood and toil. Beside the physical constructions, are also to be found the mountainous mass graves of starved people worked to death (their bones often incorporated into the monument itself), as well as the charred mounds of men, women and children publicly tortured and burnt to death for daring to protest and rebel against the harsh demands of their rightful overlords.

Regarded as obsessively narrow-minded by other Inquisitorial factions, Monumentalists are a Puritan sect with origins tracing back as far as M33, its roots intimately connected with the growth of the Ecclesiarchy and said organization's temple building spree. One infamous smudge on the sect's record is the fact that a majority of all Monumentalists energetically supported High Lord Goge Vandire's insane and self-glorifying monumental building projects throughout the Imperium during its Age of Apostasy. To the blinkered minds of Monumentalists at the time, the decrees of Vandire were proof that the God-Emperor Himself had judged their cause to be righteous, as evidenced by His will, as carried out through His appointed representatives on Holy Terra, via His divine emanations.

Monumentalism among the Inquisition surged briefly during the Age of Apostasy, only to fall in numbers as cabals of vengeful Inquisitors tried and punished a considerable number of individual Inquisitors suspected of apostasy. Many of those within the Inquisiton thus put to torture and torch following Goge Vandire's downfall were Monumentalists, but the ideology itself was never outlawed nor suppressed. Five millenia later, Monumentalism persists as but one demented school of thought among many others among the hallowed ranks of the God-Emperor's Holy Inquisition.

"You will haul your burdens until the palms of your hands bleed. You will shoulder your loads until your back breaks. You will toil away until your knuckles are flayed to the bone. You will grasp your tools until your fingers fall off. All this you will do willingly and eagerly.

- Monumentalist Inquisitor Vanessa Flavinia, during a rare voxcast publicae speech to the indentured work gangs constructing the colossal statuary of Sebastian Thor Appointed by the God-Emperor in Splendour, following the utter annihilation of 538 million insurgents in the equatorial quarries of Sejanus Minoris