Ugh, the Lothern Sea Guard, another incredible model from the Island of Blood set that gives me fatigue before even starting on them. SO. MUCH. DETAIL. But looking forward to seeing them in your army's colors, I'm sure they're going to look awesome!
Top

Once again, it has been more than a month since the last post !

I started with 6 Lothern Seaguard models without being totally sure of the colors I wanted on some of the details. I thought I'll find out while painting. And painting them definetely helped me figured out what was good and what was not. But I shouldn't have done it while I was painting 6 in the same time, and that's why at some point I just stopped for 4 of them and I continued with only 2, to be able to focus and go forward more quickly. I think that was the right decision and I eventually found something I liked. I also tried more contrast with them and I'm pretty with the result so here's the result. 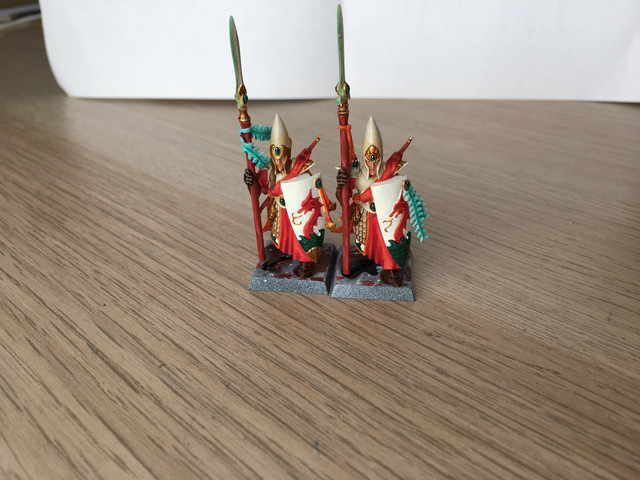 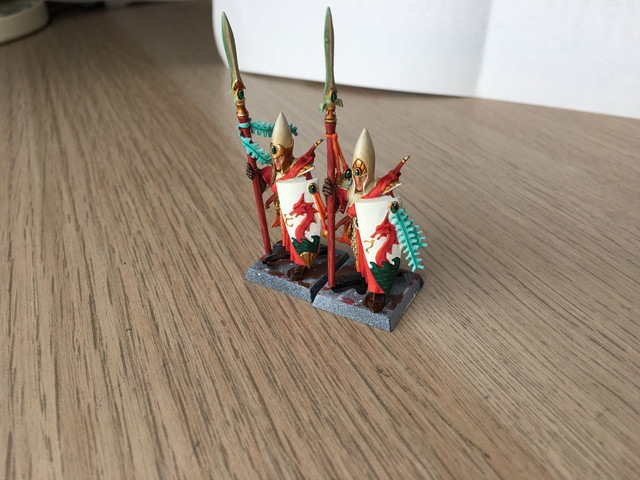 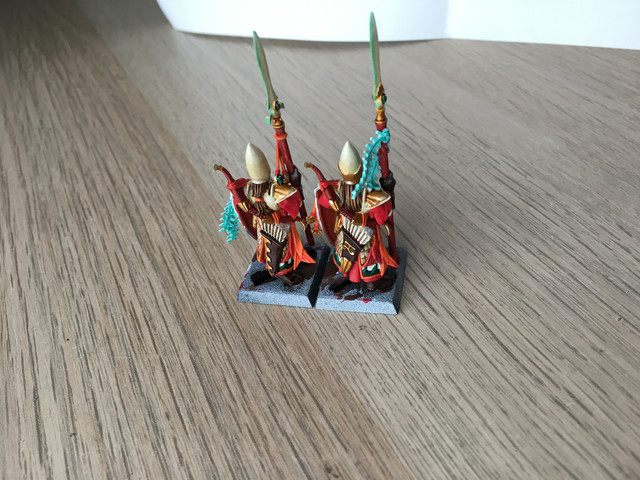 I've got 5 other Seaguard in progress. Now that I know exactly where I'm going it should be a bit quicker !

Before starting them I bought a new red paint (Vallejo Carmine Red 908) because I wasn't happy with the one I had (Army Painter Dragon Red). The color was good but the coverage was disappointing. This new one has a better coverage but it's also a lot harder to use. It's kinda thick and gelly, it doesn't thin very well and it's super easy to let some brush stroke. Not sure what I'll do about that.

I also decided what I'll do after painting my dozen of Seaguards : Eagle claw bolt throwers !
As I only have one of them, I made some more

I had a lot of fun doing it and I'm happy with the result though it needed a bit of postprocessing. I'll take some pictures and post them next time !
Painter, maker, caster
My painting blog
Top

Wow, that palette is so dynamic, I really love it! That ivory armor/helmet look you've got going continues to look so good. I've just squirrelled away 30 Lothern Sea Guard, and am not looking forward to painting them. If GW releases spear elves for the Old World, I hope they keep this style of sculpt/aesthetics, without all the additional detail.
Top

I like the colour scheme! Looking forward to see more of the Sea Guard.

I use mostly Vallejo (Model Colour and Game Colour) but now I am curious about the difference with the Army Painter paints.
"The general has this to say about ensuring against defeat when outnumbered, out–weaponed and outpositioned. It is... Don't Have a Battle."
"Sounds like a clever man," said Jenkins.
Terry Pratchett, Jingo!

Great work Azaam! The bone colour of the armour is really cool. I think my favourite is the turquoise seaweed. The contrast makes that colour pop so beautifully. They will look great as a unit.
One foot in the hobby
Top

Hello everyone !
Already more than 5 months since my last post ! Time's really flying.
I haven't really touched a brush until last week. Not that I didn't want to but more like I lost the habit of painting and starting back is always the most difficult step.

Anyway, I (almost) finished 2 bolt throwers. Both are actually copies I made form the original metal one. Hard to see the difference with a legit one, right ?
The triggers were too small to cast so I'll make them with milliput and add them later. Tbh I don't feel like it's really missing ...
I also have to paint the crew but I'm still considering making a mold of them. I also have some ideas of easy conversions so I'll think about it. 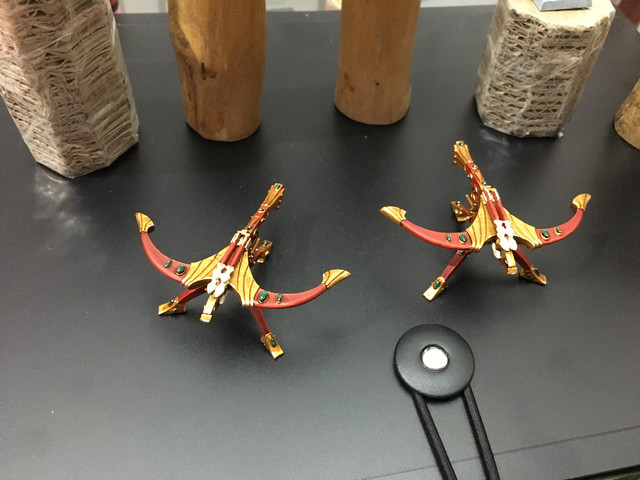 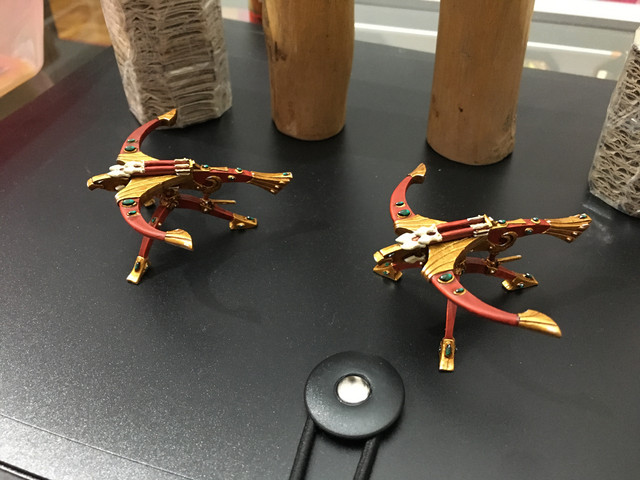 As you can see I kept the same color scheme and I'm pretty happy with the result. I also experimented a bit with the highlight for the lacquer wood. It's hard to see, especially on the curved part so I think I should go even brighter.

And my WIP : second batch of the Lothern seaguards which includes the command group: 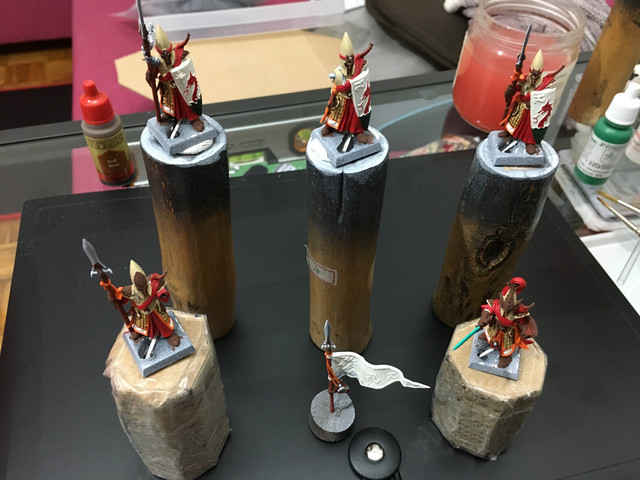 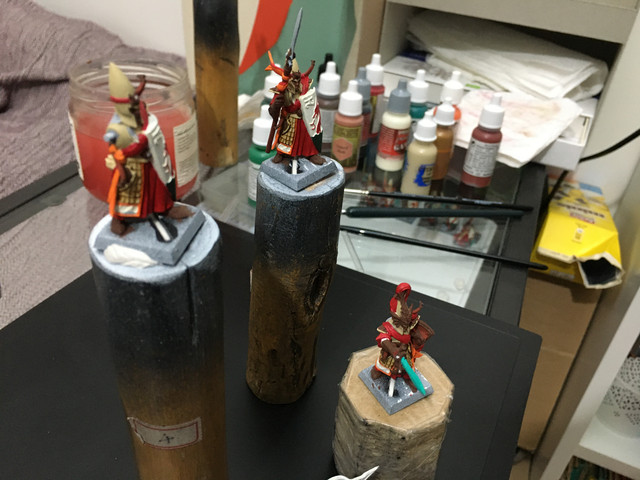 I'm glad I found the motivation to paint again and post here ! I have a lot to catch up with what you've been working on lately. I'm sure I'll be as amazed as usual !
Painter, maker, caster
My painting blog
Top

Beautiful, glad to see you're back in it!
Top

Those RBT are splendid!

Return to “Painting and modelling”